The 6-Wheel SUV is a vehicle in Crackdown and Crackdown 2.

The 6-Wheel SUV is an average sized vehicle with six wheels. It has some armor and no weapons on it.

It is found in the Shai-Gen (or Unity Heights) area. The 6WD SUV is a six wheeled vehicle. Like the Agency SUV it can drive nearly any obstacle but cannot drive up walls like the Agency SUV. It has a large Shai-Gen logo. It's is mainly driven by Hit Squads, but they turn up here and there. While it may be an SUV, it doesn't have the same abilities as the Agency SUV. Although if your driving skills aren't at level 4, this is a good subsitute for the Agency SUV, if you prefer big vehicles. It is good for climbing steep rocks and hilly terrain.

The 6-Wheel SUV makes an appearance in Crackdown 2. It reappears in Crackdown 2 with its back end removed and covered in armor plating. It is a Cell vehicle, along with the normal SUV. It has good armor and is slow to start but once it gets going, it slowly becomes faster. 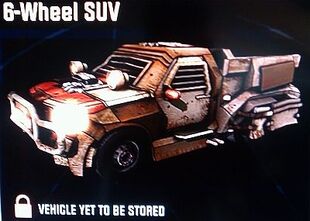 In Crackdown 2.
Community content is available under CC-BY-SA unless otherwise noted.
Advertisement