This APC is an armored vehicle used by the Cell in Crackdown 2. Just like Crackdown, only 2 players are able to get in the APC.

The APC is a large, rectangular vehicle with 6 big wheels and is heavily armored, though as not as much the Agency Tank. It's able to withstand 7 standard Grenades at Explosives level 1. Like other armored vehicles, it withstands fire well, but hits and crashes damage it. Previously used by the Volk in Crackdown, then by the Cell in Crackdown 2. The APC is fairly mobile, however moves rather slowly (120mph) when compared to other Cell vehicles of similar size. It is based on the Alvis FV623 Stalwart.

An APC in Crackdown 2. 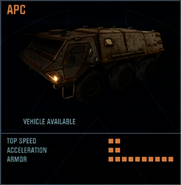 An APC in the Agency Support menu.