Protect and work with the agency to bring Justice.

"You are the portent of a New World Order, agent. Pacific City was only the beginning..." - the Agency Director

Agents are genetically modified superhumans created by the Agency, using the work of the disgraced Dr. Balthazar Czernenko. They serve as the main playable characters in each installment of the Crackdown series.

When the Peacekeepers find themselves unable to fight back on their own, the Agents step on to serve as the Agency's hard hitting response to organized crime, providing back up to the strained police force and protecting the people of whatever city they’re stationed in. These blue and black clad enforcers of the law are essentially government sanctioned Supermen.

Agent Heights is no secret that when you max out your agility or your strength your characters appearance changes. This of course includes your height. Mainly crackdown one and two.

Starting: your height is roughly about 6 feet tall

Being the best of what the Agency has to offer, Agents enjoy direct access to the Agency's best high-tech equipment.

Augmented and superior to their human counterparts, Agents are almost fully superhuman in nature, possessing superior strength, agility, and quicker reflexes. However, while the forceful entrance of an Agent means the same as a four-man squad of Peacekeepers, they're still susceptible to heavy resistance. Enough trauma can incapacitate or kill an Agent. But cloning facilities present in nearly every Agency department allow for the quick redeployment of previously slain Agents.

Another key feature in their biology is the to 'evolve.’ Each Agent is given a set of specialized augments upon creation that improves their performance according to the amount of field experience they collect. These 'skills' are the measurements employed by the Director to monitor their progress during their fight to uphold the law. Skills are improved through the method employed. If an agent kills an enemy with a firearm, then the criminal will drop small orbs that accumulate into them, adding to the Firearm skill. Once an Agent reaches a certain threshold of skill, then that will 'evolve' into the next level, making them more effective with it, as such, a Firearm Skill evolution will allow the Agent to reload their weapon faster and become more accurate.

To protect themselves while out in the field, Agents use a special bio-armor, crafted to evolve while the Agent does, changing their appearance as they improve their five core skills. Becoming more prominent and visual as the Agent grows the five skills.

In Crackdown there are eight playable Agents in total, plus an extra four if you have downloaded the Four-Play pack DLC. However, the exact number of the Agency's Agents in service at the time of the game is presumed to be much higher.

In the Pacific City Archives mini-series released prior to Crackdown 2's release, it is revealed in Episode 2: "Evil Seed" that the original Agents from Crackdown were infected with a deadly virus created by Catalina Thorne, which grossly mutated them and nearly all clones made of them. This resulted in the destruction of the Agency's cloning labs, setting The Agency's cloning technology back many years, effectively to "square one".

Crackdown 2 sees the creation of a new type of Agent. These new Agents are now protected by a more advanced suit, which evolves along with the Agent, providing the Agent with heightened body protection and full facial protection.

These new Agents also gain new abilities once they reach the peak of their Skills. With Level 5 Agents acquiring Wingsuits, Barge, and Ground Pound attacks as a result of their efforts.

In Crackdown 2, there are only four Agents to choose from with basic suit colours. But will have a variety of suit colors to select (16 in single-player with all DLC, 20 in multiplayer with DLC too).

Agents return in Crackdown 3, this time with more distinctive personalities and backgrounds. These agents also have their own different skill XP boosts. For the first time in the series, Crackdown 3 introduces female agent skins as well as existing male skins. Some of these agents are unlocked, and have to be found by collecting Agent DNA - each Agent DNA that is collected will reward the player with a new agent with different XP boosts. There are a total of 21 agents you can play as in Crackdown 3. You will only have access to six agents when you first start the game, and will have to find the DNA for the remaining 15 agents around the map before you can play as them.

Driving to Agents is expected to become proficient with all available vehicles. Whether Agency-owned or commandeered, vehicles are crucial to an Agent's continued success on the street. Explosive are provided with sophisticated explosives before being placed on assignment. Agents will be regularly outnumbered while in pursuit of their duties, and often they will need to break down seemingly impenetrable barriers; superior firepower is therefore required to even the odds and increase the chance of success. Firearms are expected to become superior marksmen while in pursuit of career criminals. All forms of organized crime ensure their soldiers are proficient with firearms. No Agent can expect to succeed in removing these threats without becoming an expert in all forms of firearms, including those confiscated from dead criminals. Agility is the ability to dodge attacks and access remote, often altitudinous, areas is critical to success in removing gang influence from the streets. All Agents must work to improve their agility while serving in the field. Strength will not always have access to additional ammunition or advanced explosives. An Agent must be capable of stopping criminals quickly and effectively in close-quarters combat, as well as in being able to use his environment to his advantage. All Agents must continually train to increase their strength while serving in the field. 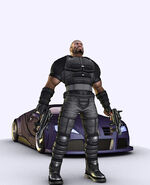 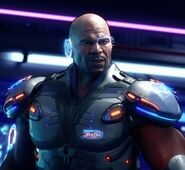