Freaks are diseased and genetically modified humans created by Dr. Balthazar Czernenko. Behaving similar to zombies, they will attack any non-freak on sight. They appear in Crackdown as a minor enemy faction, and again in Crackdown 2 as a major enemy faction.

Freaks are mutated and disfigured humans, the result of Dr. Balthazar Czernenko's failed experiments. According to the reports given to the Shai-Gen Corporation by the deranged doctor, they were created to be their own version of Agents. It is far more likely, however, that he made them simply because he could.

Freaks are first encountered by the Agents when they attempt to remove Czernenko. As a result of removing Czernenko, the Freaks are released into the Corridor and start appearing later during the day around the Institute of Research in pairs, attacking civilians on sight.

In Crackdown, Freaks are not a big threat to the player. Although they are faster than gang members and capable of throwing you around, they are easy to eliminate when compared to the major enemy factions that are present in Pacific City.

The Freaks in Crackdown 2 were not the result of failed experiments, but the result of Catalina Thorne's revenge on The Agency and Pacific City. Catalina Thorne created the M2448 virus while she was a research assistant at The Agency Laboratory. After her experimentation came to light, she was fired and took revenge on Pacific City by infecting the homeless with the M2448 virus during "Free Medical Consultations". These are the Freaks, or abominations, that haunt Pacific City at night.

Freaks come in several varieties, from the recently-infected Ramblers and Scroungers to the most evolved form, the Goliath. Stronger Freaks possess all of the mutations developed by the preceding forms.

The threat from the Freaks can be judged by the acid colour they secrete from their sac. There are three stages to Freak mutations:

Freaks are encountered only at the end of Crackdown, but are very common in Crackdown 2, appearing in Freak lairs during the day and in the streets during the night. Due to their commonness, it is advised to take several tactics on board before confronting a band of Freaks:

In Crackdown 3 there is a Multiplayer wrecking zone map that is a memorial to the events that happened in the second game and statues can be found of freaks like: Reapers and Goliaths. 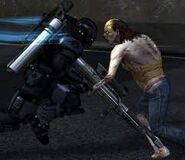 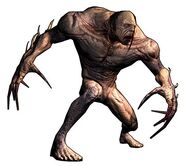 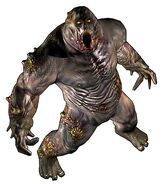 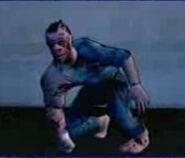 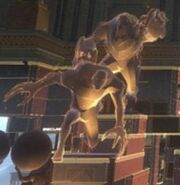 The freak statues of a Reaper and Goliath.
Community content is available under CC-BY-SA unless otherwise noted.
Advertisement