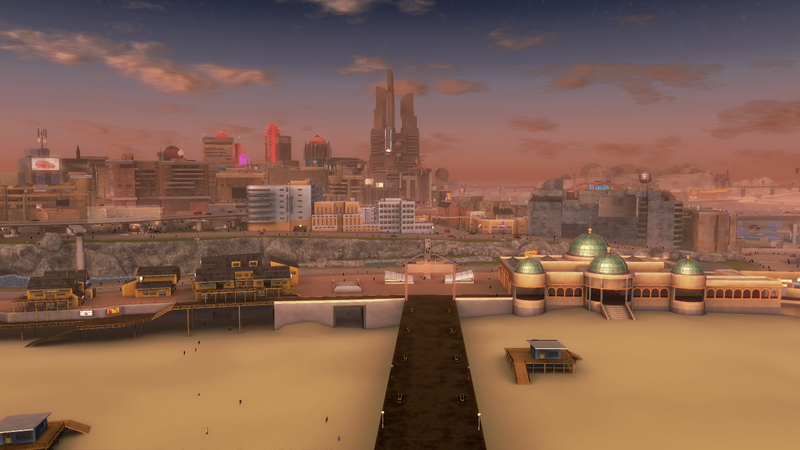 Pacific City is the setting in Crackdown and Crackdown 2.

This is Pacific City—a beautiful respite for traveler and resident alike. This rocky island community is rich in industry, luxury, and natural beauty, but the former utopia has become tainted by crime. Three criminal masterminds have infiltrated this peaceful domicile and have transformed Pacific City into a metropolitan morass of murder and mayhem.

The city is now broken into three distinct areas, each ruled by a vicious kingpin.

The city consists of three clusters of islands, which form the city main districts. The skyline is dominated by the massive Agency Tower based on a lone islet in the city center, it is the tallest building in the city and home to the international police organization known as the Agency.

During the events of Crackdown, Pacific City is depicted as a once-illustrious city that has been plagued and ravaged by many criminal syndicates that operate in the city.

By Crackdown 2, most of Pacific City's buildings have been destroyed primarily due to the Freak virus spreading throughout the city as well as the growing tensions between the Agency and Cell. The northern island of Green Bay is now home to many displaced citizens of the city, and the some buildings (including the Agency Tower) have been renovated since the last 10 years.

Pacific City has many different buildings and businesses in Crackdown from either: Gang Locations or places.

Pacific City is plagued by three distinctive gangs: Los Muertos, Volk, and Shai-Gen. The Agency, outmanned and outgunned, is forced to retreat to its stronghold, the Agency Tower. There, the superhuman Agents, a new breed of crimefighter, are created. It is up to these Agents to purge Pacific City's three districts of the gangs and allow the Agency to restore peace.

Known as "the Keep", the Agency Tower is the base of operations for the Agency. Three subterranean tunnels link the Tower to each of Pacific City's three districts. At night, spotlights atop the Tower's three sub-towers watch over the city.

Ruled by the Los Muertos drug cartel, La Mugre is a haven for the gang's drug operations. Most buildings on the district's southern island are apartments and hotels. The Pacific City Police Department building is located here, as well as the city's amusement park, Funland. The northern of La Mugre's two islands is mostly undeveloped, aside from a lighthouse to the north, a sprawling villa to the west, and a large auto-racing dome near the center.

The Den is controlled by the Volk militia group, which specializes in human trafficking. The district's southern island is heavily industrialized. The area is dominated by the Hi-Power nuclear power plant, the City Coaches public transport depot, and the docks. Apartment blocks rise on the island's west side, and to the east lies the derelict Camp Johnson military base. The district's northern island is home to Mason's Quarry and the Puregy Refinery, connected by pipeline to the Exetron Oil Rig just off Pacific City's coast.

The Corridor is held in the iron grip of the Shai-Gen Corporation, created by Pacific City's previous government to design radical new civil defense solutions. Now run wholly by Shai-Gen, the dystopian Corridor features most of Pacific City's tallest buildings, including the Tower, home to Shai-Gen's CEO, and Central Point. Most structures here are purpose-built for businesses under Shai-Gen's umbrella, such as the P.C.N. Research Institute, Human Reality, Inc., the Knowledge Bank, and Insight Counter Services. The majority of the district's three islands are heavily developed, but a small park area can be found in the middle of the northernmost isle.

Ten years after the Agency crushed Pacific City's three gangs and assumed control of its citizens, the city has gone through many changes. A virus has ravaged the city's people, turning many into the horrific Freaks and allowing a group of rebellious citizens, the Cell, to drive the Agency back into its Tower. The Supply Points of Crackdown have been replaced by airsupport beacons. You must either extract or take over a Cell Stronghold to get vehicle and weapon drops. The Agency has added helicopters to the city, as well as new vehicles for Peacekeepers like The Buggy and the new Patrol car. A new generation of Agents must wipe out the Cell and assemble Project Sunburst to rid Pacific City of the Freak infestation.

The Agency Tower has been renovated considerably over the decade since Crackdown. An expansive Agent training ground now covers most of the island, and a smaller islet to the east has been raised to serve as the site for a mysterious "Holding Pens" building. The underwater tunnel system to the city has been closed down, and replaced by a single suspension bridge to the Hope Springs district. The Tower itself has been substantially refitted to house the mechanisms necessary for Project Sunburst.

Much has changed in the district formerly known as "La Mugre". The abandoned Funland amusement park is now a Cell stronghold, along with several other structures across the district's islands such as the Pacific City Police HQ, the Villa, and the Lighthouse. Most notably, a large Shanty Town has been constructed up on the mountainous northern island, built by desperate refugees from the Freak infestation. Freak Lairs can be found in the ruins of the Sportiz Gym and the north island's Radio Station.

Freaks have swamped most of Hope Springs, the former "Den". The only unaffected areas include the Cell strongholds at Springside Quay, the Puregy Refinery, and the main apartment block which has been walled off from the rest of the district. Hope Plaza, once the site of Volk rallies and the location of Pacific City's civic center, is now the epicenter of a major Freak infestation. Freak Lairs have erupted through the Power Station, Camp Johnson, and Mason Quarry.

Unity Heights, as the source of the Freak infestation, has been hit the hardest. Crumbling containment walls divide most of the district, the Agency's first attempt to quarantine the Freak virus. Most of the area's skyscrapers have been abandoned; as a result, the lack of maintenance has caused many buildings to collapse or portions to break off into the streets below. The Tower, once the second tallest building in Pacific City, is now a burning ruin, it's top having fallen into Unity Heights Square. The Agency-constructed Hope Tower, built on the site of the old Central Point building, is the most prominent part of Pacific City's skyline. However, it has since been taken over by Cell troops. The former "Corridor" is home to the most Freak Lairs in the city. 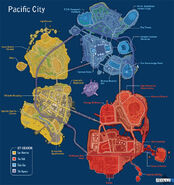